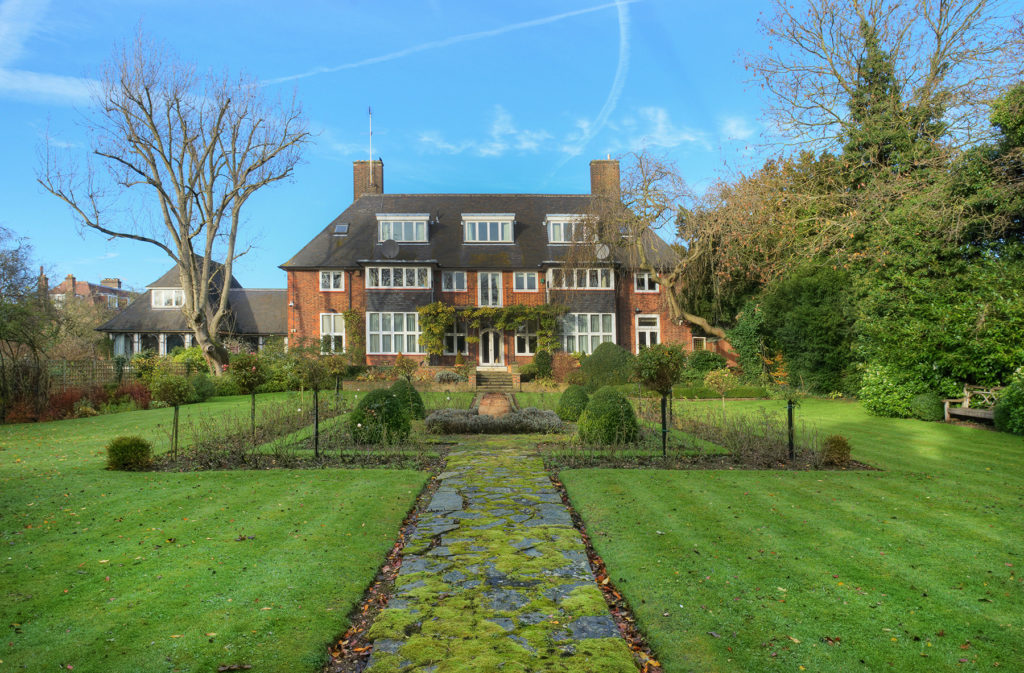 Former Hampstead home of King Constantine II of Greece, sold by Glentree; venue for luminaries and glitterati, including the Late Princess Diana and her two Princes

Not all is lost with Covid-19. Jonathan Wein at Glentree, has been cracking open the ouzo in celebration of the sale of ex-King Constantine II of Greece’s former London ‘palace’ in Hampstead Garden Suburb which, despite the lockdown, managed to sell for over £6million.

There is a pleasing dramatic flourish to the story, since originally the King bought the property in the early 70s, from the serial entrepreneur, Bob Tanner – joint founder of Glentree International – for the princely sum of £325,000, at the time.

In keeping with the usual Greek penchant for understated elegance (cf: the Acropolis, Parthenon, etc.) the King spurned the gaudy, show-off super-mansions of The Bishops Avenue and plumped for this leafy backwater. Interestingly enough, the price he paid was not far off the other iconic addresses further up the property stratosphere.

Residential Velcro for the great

Hampstead Garden Suburb properties have been the residential Velcro for the great, the good (and not-so-good), minor royalty, ‘slebs’ and titans of the industry for over 50 years. Cross Whitestone Pond in Hampstead and you enter a surreal, bucolic fairy-tale world, complete with red telephone boxes and village greens.

Not surprisingly, the architectural integrity is jealously guarded by a mixture of Barnet, the Suburb Trust. If this were not enough, any listed property is protected by English Heritage.

Any external architectural changes would have to go through the Byzantine mangle to process them, still, on the other hand, it does preserve and enshrine the aspirations of the founder, Dame Henrietta Barnett. At the turn of the last century, her vision was an enclave where paupers and princes can wave to each other across the garden fence. Today you can buy a cottage for £500,000 or a veritable palace for £100million, separated by just a few yards.

The external elevations of the ex-King’s house reflect the Lutyens, Arts and Crafts charm and sensibility of the Suburb; the show-stopper of the property and its USP, is the manicured rear garden, which stretches to approximately 0.8 acres and looks out over the 90-acre Heath extension, giving an impression of the endless semi-rural horizon.

Space was never an issue in this residence, which stretches to more than 9,500ft² – which was just as well, since the Greek royal lifestyle was typified by a burgeoning family entourage, with a glittering social network and army of domestic staff, to attend to their needs. Hence, the 13 (yes, you read that correctly) bedroom suites, where a small army could be very easily lost.

Even in the most rarefied circles, it would be difficult to surpass the illustrious ‘A’ list guests at one of the many functions, held in the property. Oh, what a joy it would have been for anyone to be a ‘fly on the wall’ at some of those events. Regular visitors to this aristocratic haven of bourgeoisie included Princess Diana and the Princes, William and Harry, who were often seen neatly buckled-up in the rear seats of her open-top Audi.

Endless limousines with their upper-class cargo would trundle through the bosky hamlet, presumably looking for a cross between Buckingham Palace and The Temple of Athena. They must have been surprised by its architectural modesty when entering the drive, which was typical of the pro-rustic splendour of the Suburb. The cliché about not judging a book by its cover held though since the interior epitomised luxurious understated refinement.

My experience with Greek families is that their taste is even more restrained than our homegrown aristocracy. They favour a much more traditional, typically British designer influence, such as Colefax and Fowler rather than aspire to the ‘shrines to avarice’ created by some of the latest bling-addicted, gaudy designers.

Not 400yards away and awash with newly minted petro-dollars, King Khalid of Saudi Arabia bought ten palaces in The Bishops Avenue, during the mid-70s. However, the Greek King rejected this type of overt opulence, for the sensible reason that his country was roiling in socialist revolution and all vestiges of monarchic symbolism were ‘apagorevmeno’ (forbidden).

As time, the great healer plays its part, I understand that there has now been a rapprochement with the Greek government. As the ex-King missed his homeland, he has been allowed to repatriate his family to seek rest and repose in the privacy of more exotic climes on one of the Mediterranean islands. So, all is forgiven – at least for the moment – in that part of the world.

With such beautiful architecture and fantastic transport links, The Suburb has become one of London’s most desirable areas. If you choose Glentree Estates as your estate agent, we guarantee that we will do everything possible to ensure your sale goes through smoothly and quickly so that you can move into your new home sooner rather than later! Contact us today or visit our website at glentreeestates.co.uk for more information about living in this sought after area!