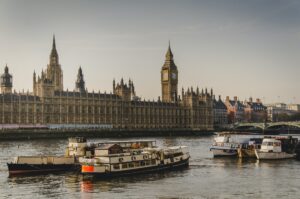 Flaxen-haired ‘greasy piglet’
Whether you love or loathe the flaxen-haired ‘greasy piglet’ (to borrow his insult about Tony Blair) we surely must agree that the festering ‘Partygate’ issue or should I say, more appropriately, ‘Banging Gate’ should be resigned to Room 101, along with the 148 MPs who voted ‘no confidence’ in the PM recently. This, in the main, was really a tantrum by spoilt brat, Remoaners who still hold a grudge against Boris ‘for getting Brexit’ done’ (at least shall I say, in parts).

The vote turned out to be a ‘damp squib’ and if the dissenting group had a brain in their heads, they would have left it until the two imminent by-elections which, no doubt, would have then had greater gravitas and effect.

Vindictive Remoaners
Only Boris could have hauled the UK out of the possessive and manipulative clutches of the EU. However, the bitter and vindictive Remoaners nurse their resentment and are desperate to inflict a fatal blow on the PM by way of retribution.

To leave the MO arrangements in Downing Street during the Covid lockdown, to a bunch of Civil Servant nudniks, led by Simon Case, was stupid on steroids. Boris clearly needed a disciplinarian there to control his staff and himself, for that matter.

Given the lynch mob of anti-Boris MPs, this was akin to walking naked through the lion enclosure of London Zoo, carrying a hog roast.

I fully understand that it must have been nauseating and hurtful for decent, law-abiding citizens of this country to be denied the opportunity to say goodbye to their deceased relatives and give them a proper funeral, while our rulers flagrantly and brazenly disregard rules of their own making.

Let’s be honest, on the world stage this issue must be risible compared with the unfortunate ‘habits’ of leaders, as this would rank as a minor misdemeanour, not worthy of a mention.

Broadly speaking, we are fortunate to live in this tolerant, liberal nation, where there is a good degree of government transparency. However, in terms of rule observance, we take pedantry to a new level.

£300 duck house
If misstatement of MPs expenses includes a £300 duck house and is the definition of British corruption, we definitely live in the right country.

Having said this, we shouldn’t allow the ‘lynch mob’ mentality to blemish the excellent record that this somewhat dishevelled, comedic Prime Minister has achieved against all odds.

Allow me to elucidate; his army of detractors indulge in group Boris-bashing, but it must be remembered that he won five contests; twice Mayoral candidature in a left-leaning city (the equivalent of Trump being elected as Mayor of New York); the Brexit referendum, where he was up against the combined forces of Cameron, Osborne, 500,000 civil servants and the entire resources of the government – all he had was Michael Gove and a dog; the leadership of the Conservative Party and almost single-handedly, the greatest unexpected landslide election result of the past 30 years.

As for the significant matter of the Covid jab, every country was given the equivalent of a ‘MENSA test’ (ie the vaccine puzzle). Boris’s single-minded brilliant solution led the world. He got to the finishing line first, whilst the lumbering, 27-nation Euro-buffoons, besieged and paralysed with their own conflicting self-interests, took six months to do the same thing which led to tens of thousands of unnecessary deaths, at the time. Strange, isn’t it; the public outrage was deafeningly silent.

But we must remember that there’s no such thing as ‘bad news’ in the corrupt European super-state. Anything negative is buried under layers of ‘directives’ because Heaven-forbid, the public should be allowed to know what’s going on. In the UK we are allowed our own opinion and our MPs are accountable but as the Irish, French and Dutch referenda demonstrated, it is OK to manipulate democracy in Brussels, after all, the examples in Russia, Iran, and Venezuela are all at it as well.

Boris mounted his white charger with the Ukrainian problem and rightly so, became a hero of that country, whilst the ridiculous, disjointed and dyslexic European foreign policy (if there is one), was in total disarray.

Your pet goldfish could have reasoned better that Germany’s sycophantic and imprudent energy policy with Russia, defined the terminal myopia of their last administration.

The former Chancellor Schröder is today, bathing in riches as a result of his rather lucrative position in Gazprom which he only recently decided to relinquish.  Shame!

‘Poundland Bonaparte’ Micron
Meanwhile, the ‘Poundland Bonaparte’, Micron, has still refused to condemn Putin and so far, declined to visit Zelenskyy in Kyiv.  One can only presume that in keeping with Gallic duplicity, he is preparing the commercial benefits for France, by backing both sides.  With allies like this, who needs enemies?

Marty Feldman circular firing squad
How we scoffed at the ‘Orange President Trump’ when he tried to bully Merkel into increasing their defence budget from 1% to 2%.

The EU foreign policy towards Russia is the equivalent to the Marty Feldman circular firing squad, with all the coherence of an alphabet soup in a centrifuge.

And if we’re so quick to point the finger of judgement at Boris for his just-rocked-up, fumbling unorthodoxy, then it seems that Winston Churchill would never have been a constituency MP, on the same basis.

Portcullis comes down on his toes
I’m rather hoping against hope that Boris ‘wakes up and smells the coffee’ before the portcullis comes down on his toes, although I fear that after the party conference this year, if one or more of the Big Beasts of the cabinet judiciously or collectively decide to resign, then I’m afraid this will spell ‘Sayonara’ in the sand for him.

Who is there to replace him?  Jeremy Hunt? (if you will forgive the misspelling of his name).  He would certainly be easily lost in a ‘conference of librarians’.  Please tell me that a grey suited John Major is not going to grab the reins of the Tory party, since before we can say, ‘Richi Sunak’, we will be screaming once again, for Boris’s colourful and chaotic personality.

It is fanciful to assume that ‘plain vanilla’ will inspire and galvanise the ‘Blue wall’ let alone the ‘Red wall’ of voters, at the next election.

Questioning Remoaners, are baying for instant gratification from Brexit and although the vaccines were the first fruits of Brexit, I’m afraid they are going to have to be patient for more dividends,

As we all know, momentous generational decisions, such as this, take a while to produce results.  The German unification dragged the perfect west German economy through the woods for over 20 years and yet not a murmur of dissent from the indigenous population, even though the west Germans paid eight times too much for their eastern counterpart.

Europe is imploding and now occupies 50% less of world trade than 40 years ago.

Perversely, the low growth, high unemployment, and a towering national debt of the other EU countries, serves to devalue the Euro against world currencies, which is a benevolent gift for Germany, as the second largest exporter in the world.  What a deal… for some.

Although it took five years and many lives lost during the war, the courageous way forward was always the best.

Let Great Britain sail forth by burning red tape and reducing the crippling tax burden by aspiring to be Singapore-on-Thames.

Rejoice in our Brexit freedom and be pleased that we have escaped the shackles of bureaucracy and let’s sing together, ‘Hallelujah!’