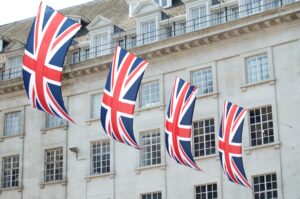 Every so often the anti-monarchy brigade and other unwashed rabble raise a squeak about abolishing the Royal Family and electing a Head State. Luckily for the rest of us, this remains an unpleasant, almost sacrilegious fantasy. Just imagine standing outside Buck House to see King Rishi of the Holy Tax Rise on the balcony, waving to an adoring crowd (of one).

The Royal family has reigned for more than a thousand years

While there seems little to celebrate in the country at the moment – impending strikes, inflationary spiral, Piers Morgan, etc. at least we have our stalwart Queen at the helm to remind us of what is Great about Britain. The Royal Family has reigned for more than a1000 years, a trend started by Saxon King Ecgberht in 827.

Apart from a brief hiatus for the English Revolution of 1642 – 1651 where the king was beheaded, they have kept going through war, peace, abdication crises, scandal, court cases and a burning castle.  Ma’am has certainly put in the hours. The Platinum 75-year reign of Elizabeth II numbers 25,681 days from 1952 to the present. That’s quite some work ethic.

Sometimes we don’t know when we’re well-off. The Queen is one of our most popular global brands, revered and respected in the UK, Commonwealth and throughout the world. Let’s be honest – her funeral (may it not be for many years) will be the biggest sell-out gig of the last 100 years.

Britain is still the 7th largest global economy and once upon a time, used to rule not just the waves, but an empire of half a billion people across 24% of the earth’s total area.

We have exported more value than any other country, including our culture, inventions, judiciary and customs. Britain has given the world its language and its GMT measurement of time, as well as scientific innovations, architecture, the telescope, football, indoor toilets, theatre, music, the tin can, golf, the internet, steam locomotives and passenger railways (amongst a plethora of other inventions) which have improved people’s lives.

London, as the greatest city on earth

We have made our mark and today, Elizabeth II presides over a thriving, liberal and tolerant nation with its capital, London, as the greatest city on earth.

I’m in full agreement that Royal Britainnia II should be delivered for the Monarch’s use (send the party invite to Glentree, please). It’s a great tool for industry leaders, who can ‘strut their stuff’ and encourage trade with other parts of the world.

We are still a proud maritime nation

Despite a modest defence budget, we’re still a proud maritime nation. We have two of the largest and most modern aircraft carriers to project British power throughout the world. Our Harrier Jump Jet became the prototype for the sophisticated American F16, which is lusted after by many countries.

As is the way with most families, the Royals have had their adversities, albeit in more gilded circumstances than your average dysfunctional brood. Nevertheless, this is a time to celebrate this unprecedented reign of an extraordinary woman who has given unstinting service and outlasted the 14 Prime Ministers that have served the realm since her coronation.

We are witnessing history. What a sight it will be when the nation unites to salute our monarch and the RAF Fly Past as she stands majestically on the balcony of Buckingham Palace in a few days’ time.

She continues to reign over us, happy and glorious

I was not born here, but I am grateful and privileged to have been a ‘guest’ in the UK for the last 60 years. I salute this glorious country, since despite the trials and tribulations that exist in the world, our values and principles are very much intact for all to see. So let’s raise a glass to HM and hope that she continues to reign over us, happy and glorious.