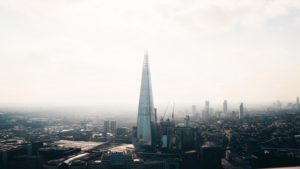 According to a new website ‘Addresspollution.org’, the chattering-class ghettoes of Chelsea, Notting Hill, Regents Park and Camden suffer air pollution of well above the legal limit of 40micrograms of NO2 (Nitrogen Dioxide) per cubic metre of air (mcg/m3). I’m sure that much of this can be attributed to the residents’ penchant for spouting mindless, à la mode PC drivel.

Nevertheless, the safest areas for your lungs appear to be Sevenoaks and surprisingly, Biggin Hill, of all places! Yes, that Biggin Hill, whose annual air show must dump the equivalent of a Vesuvius eruption in the Kentish atmosphere. Apparently these towns bask in the lowest concentration of the nitrous pollutants.

I suspect that underneath the frenetic ecological hysteria of this supposedly laudable pursuit, is a left wing sub-text, bursting to get out and wag its finger at us.

Before a screeching mob of vegans tries to turn me into a tofu-burger, let me state that my environmental credentials are impeccable. I drive an electric car, my domestic rubbish is meticulously curated and the sight of a litterlout makes me want to take a biodegradable, blunt object, to their soft bits.

As with all things infested by the ‘watermelon’ ideology (green on the outside, red on the inside and an IQ of a slushy fruit) this eco-mania has gone beyond the bounds of rationality.

One glaring example of this stupidity is Barnet Council, which along with other boroughs across the country, has outlawed independent gas-fired boilers in newly developed properties. The reason (though I doubt any of the councillors engaged in ‘reasoning’) is because of the carbon footprint of these boilers. Instead, they insist on a central boiler that miraculously fulfils all the apartments’ hot water and heating requirements.

The Lexington, a new development of apartments on the Finchley Road, NW11, has installed such a ‘low carbon’ system and the result? The heat losses transferring the hot water from the boiler to the apartments is so enormous, that during the summer, temperatures in certain flats can go up to a blistering 97°F. Great, if you want to fry a free-range egg on the carpet or you are passionate about saunas, but not so good, if you want to feel comfortable. This can only be reduced to a more normal 72°F, if you’re blessed with air-conditioning. Go figure. Overtures of the actor Steve McQueen in the ‘cooler’ of Stalag 17 in ‘The Great Escape’ spring to mind.

It’s the most ridiculous scenario I have ever heard and in ecological terms, is the equivalent of ‘flooring the accelerator whilst standing on the brake’, at the same time.

In the greater scheme of things, it also shows how government-led ‘initiatives’ stomp all over common sense and leave an expensive and inefficient mess for someone else to clean up.

Remember the government insistence that every home sold by an agent, needs an energy performance certificate (EPC)? You’re more likely to win the Lottery while being struck by lightning, than meet an applicant who has ever read or taken any notice of them.

While the public sector busybodies feel oh-so-righteous, the Residential Property Market is struggling for breath under the burden of Stamp Duty and Brexit vacillation. Adding another layer of pointless bureaucracy may have it gasping its last. Is that the result we want from this ‘pollution by postcode’ endeavour?

The biggest culprits are the diesel spewing cars, taxis and buses. Electrification of transport will reduce the Nitrous oxide in the air, particularly in summer, and we’ll all be able to breathe a lot more easily.

In search of cleaner air

If you want cleaner London air, take Hampstead, for instance. For nearly 300 years it has been considered an oasis of sylvan rectitude, with a reputation for ‘healing waters’ (probably not Highgate ponds in January, though). This was all the more so in the 17th Century when City of London residents had to suffer the twin assaults of open sewers and smog from log fires. Since Hampstead languishes at 800 feet above sea level, this has a very beneficial effect on the air quality. Small wonder then, that discerning homebuyers choose this leafy enclave as one of the most ‘des-res’ parts of the Capital.

I’m sure our Asian friends from Japan, China and Singapore would be interested in the pollution levels of a particular borough, since they can often be seen sporting protective facemasks.

All in all, those who consider an area with lower pollution to be better for family life and work may favour this initiative and the positive effect on values could be appreciable.

London is always compared to New York, since it is also an exciting, electric city, bristling with life and diversity. However, the Big Apple is coated in several layers of dirt, as evidenced by the grubby stains on its buildings and streetscape, whereas London, by comparison, is a picture postcard of ecological sanctity.

We should be grateful to have this historic place as our Capital, rightly considered as the greatest city on earth!